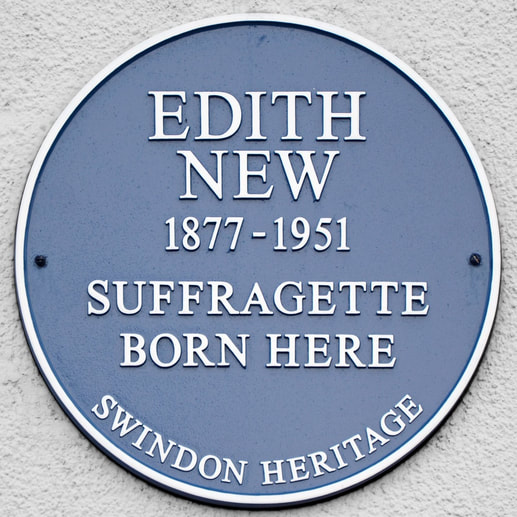 24 north street, swindon, wiltshire, uk, SN1 3JX
​Edith Bessie New (17 March 1877 – 2 January 1951) was an English suffragette. She was one of the first two suffragettes to use vandalism as a tactic. She was born Edith Bessie New at 24 North Street, Swindon. One of five children of Isabella (née Frampton 1850–1922), a music teacher, and Frederick James New, a railway clerk, who died when Edith was less than a year old when he was hit and killed by a train. By age 14, she was working as a teacher, later moving to East London in 1901.

In the early 1900s New left her teaching career and began working as an organiser and campaigner for the Women's Social and Political Union (WSPU). She travelled around England speaking to groups about the women's movement. In January 1908, Edith New and Olivia Smith chained themselves to the railings of 10 Downing Street shouting "Votes for Women!" to create a diversion for their fellow suffragettes Flora Drummond and Mary Macarthur to sneak in before being arrested. Later in June 1908 during a protest, New and another suffragette, Mary Leigh, broke two windows at 10 Downing Street. They were arrested and sentenced to two months in prison at Holloway. It was the first time in the suffrage movement that vandalism had taken place. The women were at first concerned that other suffragettes would not approve of their actions, but Emmeline Pankhurst, a leader of the suffrage movement, visited the women in prison and gave them her approval for using vandalism as a tactic for getting their voices heard.

Additional acts of vandalism and arson were planned by the women soon after. During their court sentencing, the women threatened that next time they would use bombs. When they were released from prison in August 1908, a parade was held in their honour by a delegation of suffragettes that included Christabel Pankhurst.

​The WSPU presented Edith New with a medal in recognition of her contributions to the suffrage movement. While in prison, she had gone on hunger strike in protest for the woman's right to vote.
24 NORTH STREET, SWINDON, WILTSHIRE, UK, SN1 3JX